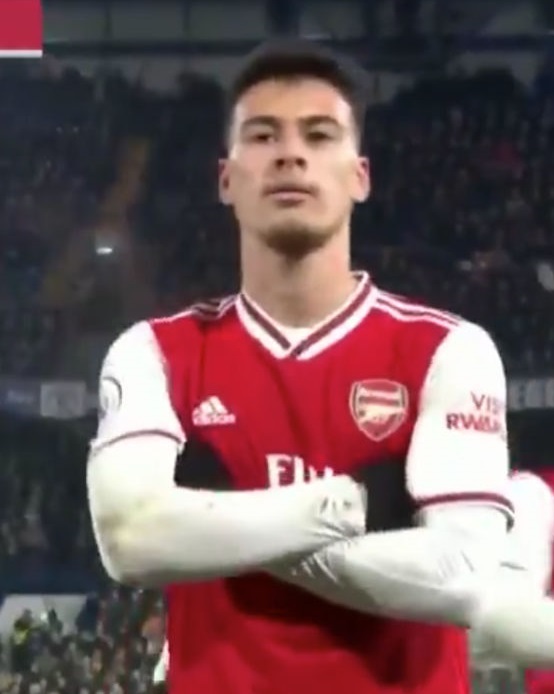 Iconic Martinelli (Image via fair use)

On Tuesday night, Arsenal showed mental strength, game management, discipline, leadership, composure, will to fight till the end and to grind out a result. That is how they twice clawed their way back against Chelsea to salvage a point even though they were reduced to 10 men for almost 65 minutes.

These are all the qualities that Gunners have been accused of missing in recent past and it is a credit to Mikel Arteta that he has been able to get so much out from this squad despite only being here for such a short period of time and taking over management when things were hardly looking good.

If Arteta ever needed a game to spring board his management of Arsenal than this had all the elements to be one. To come back twice is not easy especially being away at Stamford Bridge where Arsenal have had such torrid recent memories.. And they did it with 10 men not once but twice.

For Arsenal a night that started with so much optimism was turned on it’s head with one moment of madness by the defensive duo of Shodran Mustafi and David Luiz.

First Mustafi, sold his keeper short by playing an awful back pass that allowed Abraham a clear run on goal. Then with Leno, beaten and only goal at his mercy, he was clumsily brought down in the box by Luiz to not only give the Blues a penalty but also merit a red card to leave Gunners in even bigger mess.

Jorginho scored from the spot and awarded Chelsea the ultimate prize of their early pressure which saw the Blues pepper the Gunners box with relentless crossing which at times really troubled our back line.

After sending off, Arteta responded with patience. He moved Xhaka to the vacant CB position with Ozil playing as a CM. It would be fair to say that the Gunners adapted brilliantly to the situation and not only kept the discipline and shape while keeping Chelsea’s threat at bay but also exerted enough midfield control to give themselves a fair chance to create and make a comeback.

But even then one could see that Arsenal needed a moment of brilliance of their own to change the course of the game. Martinelli did just that. After Mustafi’s clearance from a corner, he bust his lungs to make a 67 yard run from deep in his half into Chelsea’s box, past the falling Kante (Gerrard style) and coolly slotting it past Kepa to score one of the most sensational Arsenal solo goal in recent memory.

For some reason it reminded me of a similar goal by Henry against Spurs and it is fair to say that Martinelli’s celebration was also very iconic,  just like the King himself.

After the equalizer the pattern of the game remained the same with Chelsea dominating proceedings and creating chances while Arsenal was resilient and finding their moments. This was especially true on the left wing where the duo of Martinelli and Saka remained alive all night.

Thanks to Leno, Chelsea were denied many key chances not the least was when he brilliantly pushed Barkley’s header out for a corner. But it was the home side that got ahead again from the resulting corner. Azpilicueta was sharp on the near post to beat his man and drive the low cross into the bottom right corner of the Leno’s net.

It was beginning to feel that once again Arteta would find himself on the wrong side of a game in which his team deserved more that they got. But Bellerin had other ideas and he stepped up, just like he did back at Emirates in Arsene Wenger’s last season to claw back a point from the jaws of defeat and left Chelsea stunned with a great strike.

After getting away from both Emerson and the tiring Abraham like they were not there, Spaniard put a left foot curler past Kepa to send the away crowd wild and agog in ecstasy. You won’t see better weak foot finishes than that.

Chelsea would feel that it was just another home game where they paid the price of not killing off their opponents due to their lack of creativity. Maybe they will feel that they just got FM’ed (from Football Manager) with Gunners scoring twice with their only 2 shots on target. But for Arsenal it felt like way more than that. It felt like a victory. Who can remember the last time Gooners felt so happy leaving the ground of a Top 6 club.

Arsenal’s season might already be in the gutter in terms of a Top 4 finish but Arteta knows that there is still a lot that he can achieve with this squad this season and tonight was a perfect display of it.