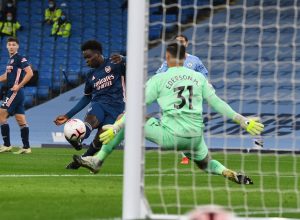 Match Report by @omijaved: Bukayo Saka was the most ambitious gunner at Manchester City.

The end of transfer window saga saw Arsenal fans rejoice at yet another piece of transfer silverware through the signing of Partey, but the real showdown was in waiting against the mighty Manchester City, with a chance to either come back down to earth or elevate even more into the high lands of Mikel Arteta’s dream.

This game had a lot of talking points in the build up. But it got dominated by the media hype surrounding the biography of our most successful and most loyal servant and his interviews. In fact, this whole thing saw Ozil get more mention in the lead-up to the game than Partey.

But despite the distractions, this game had mainly to do with one little question; “Has Arsenal closed the gap on Manchester City?”

Add to this is the fact that after such a heavy investment in the last 2 windows, we can now finally start calling this Mikel Arteta’s team.

But what we saw on Saturday, hardly gave us a sense of progression.

But against City, that ambition lasted only for 23 minutes, when Foden’s simple touch on the inside, left Bellerin for dead and Leno’s save from the shot could only get parried as far as Sterling who stroked the ball into the bottom left corner to give City the lead and eventually the winner.

The rest of game was more a show of City’s inability to kill the game off despite all their chances and Arsenal’s effort’s to make the game as neutral as possible by playing deep, slow and unimaginative football. At times, it felt like it was Gunners who were leading the game rather than the other way around.

The Gunners were too negative against a side that just recently shipped 5 against Leicester City. And no disrespect to Leicester, but Arsenal possess better forward line then the Foxes, but the difference between them is that one is unafraid to attack where as the other is too concerned about his defence.

On any other day, Saka would have scored that chance or Auba would have beaten Ederson from a tight angle or referee would have given us a penalty and the narrative would have been positive despite the numbers actually telling us a different story. We have already seen such things happen under Arteta. But just like Liverpool game, here too the result was a clear reflection of the performance.

My main observation from the game is City were better than us because we let them be. They were missing De Bruyne and their defense has not played much together. We still created two big chances without ever going on the front foot and City failed to finish us even though they were given ample space to dominate us. Maybe I am wrong, but we will never know because we never tried to hurt them.

Many say that your lineup usually sets the tone of the game and on Saturday it felt true. The Gunners front-3 appeared a positive sign but for some reason Willian was playing as a False 9 instead of Aubameyang, with Lacazette (our highest scorer this season) dropped to the bench.

It raises many questions. Some on tactical side, some on Arteta’s thinking of the game and most importantly some on Willian’s purpose in this side as well. It seems he was signed to replace the need for Mesut Ozil in the team. But the Brazilian simply lacks the technical ability to do that. And in short span he has already been tried in multiple positions playing multiple roles, without seeming at home in any one of them.

Another man who looked lost on the night was our record signing. Pepe’s problem under Emery was that the side was never set in a way to get the best out of him. He was always too far from the action to make any kind of impact in the final third. Sadly, under Arteta it feels like Deja Vu but in a different way; the team is set-up to be very left aligned, leaving Pepe isolated on the right.

People will say that Gunners expected to lose and its a progress that we lost after a close game (in terms of scoreline) but the fact is that despite only one goal in it, Arsenal never looked like creating, let alone score  a single goal in the second half. It felt like a slow death of ambitious Arsenal and even Partey couldn’t do much to change that. In fact, apart from Saka there was little effort anyway.