Despite a depleted squad, Arsenal opened their season with an away win at Newcastle. Players were out with injury, still recovering from international commitments, or in the case of Ozil and Kolasinac dealing with death threats to them and their families. Under the circumstances, and considering our poor away record over the last two seasons (11W-8D-19L), this win is no mean feat.

Another pleasing aspect was the Arsenal academy graduates played and didn’t look out of place. Nelson and Willock provided some verve and thrust, while AMN turned in, what was for me, a MoTM performance. His interception, run and assist for Auba was the key moment of the game.

Well timed substitutions handed debuts to 3 new signings as well, and these players can be expected to make important contributions over the course of the season.

Despite all these positives, I came away from this game feeling underwhelmed and even a little frustrated. 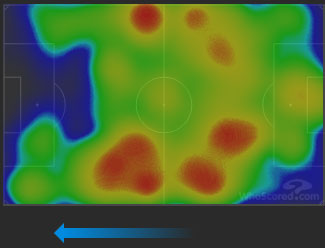 The above image illustrates why. It continues a trend from last season where the football was just not fun to watch. There’s only so many times you can see the midfield forego building through the middle and pass it out wide for cutbacks, ineffectual at that, before you’ve got to accept that this is the plan.

No doubt the likes of Bellerin and Tierney will help execute this better. Pepe and Ceballos should add some dribbling. When Ozil comes back he will help find a killer pass, even if he is shackled by the system. So there should be improvements, soon enough. All the same I can’t help but feel that this will never amount to a sum greater than its parts.

Even playing the youth, which offers its own excitement, seems to have been more a case of needs must than a priority for Emery. This too would fit the pattern of last season, something the club have tried to address by creating the Freddie led Transition Team.

The club’s target of course is Champions League Qualification. Even if he ignores the aesthetic and entertainment value of football, if Emery achieves what we took for granted all these years, he probably gets to keep his job. Which is bad news for lovers of the beautiful game. Needs must I suppose, but I maintain that not only is it not necessary, but that just like last season, playing this way will always carry the danger of missing out on the target. Dropping out of the top 4 with the complete collapse at the end of last season was a direct result of the sort of football and approach we had.

The talent and depth is now clearly there in the squad. Can the coach deliver the results, if not the performances?

Next up is Saturday’s home game against Burnley. This is a team which we have a good record against in recent years, but one which always has the potential to cause problems with their rough and tumble style. No doubt Mike Dean, the referee, will be lenient in their favor, making it more difficult for the Gunners. At least we can reasonably hope VAR will curb his ability to make critical game-changing decisions against the Arsenal, as was that penalty vs Chambers at West Brom two seasons ago. But most of all, building on the positives of Newcastle, here’s hoping the players can help deliver not just a victory, but also a beautiful game of football.