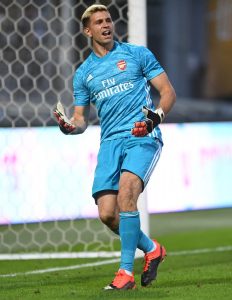 This season has truly been forgettable. Boring football, a manager sacking, getting thumped out of Europe at the hands of a team you should be dispatching with your B team, more boring football, more embarrassing defeats, you name it.

But after our journey to Sheffield, hope is still alive.

There is hope of savoring the season, of getting something out of it, of making sure it will not go down entirely as one of the worst season of Arsenal Football Club in recent memory. The hope of FA Cup and some silverware is still afloat. For how long is another matter but for now the hope is enough to keep this season still relevant.

That hope looked like it was almost gone when in 87th minute David McGoldrick pounced on some questionable defending in the box to put Sheffield United on level terms, just few minutes shy of booking our Wembley ticket. At that moment, it felt like deja vu. Straight away memories went back to the way we got knocked out of Europa League earlier this season. In control of everything, only for it to go splat in the most spectacular fashion.

So, do excuse me if I thought our season had come to an end when McGoldrick scored. But Arsenal are not that straight forward. Even when almost completely out, Arsenal will still do enough to keep fans all tangled-in, just enough to make the pain even more worse.

In retrospect, Arsenal was bound to create chances just like they did against Olympiakos that fateful night. But to create is one thing, to finish is another. Once Arsenal go down a certain path you normally expect more disappointment these days rather than epic turnarounds.

The sad part is my belief in current team is so low that what transpired took me by surprise and I actually first went into a state of shock before going into the one of complete joy and madness.

Arsenal may have been down but Martinez had other ideas. After a brilliant save by the keeper, he sprang the counter-attack. Arsenal worked the ball down the center of the pitch with Saka setting Pepe free to create a match winning scenario on his own. Good for us Pepe couldn’t completely control the ball in the box otherwise who knows.

Dani Ceballos has only had flashes of brilliance this season. But on Sunday, for a few moments he made every Arsenal fan forget about the pain of this season. He latched onto Pepe’s miskick, took two strides forwards and drove the ball hard and low between the near post and the keeper. GOAL!

The FA Cup right now is the only competition that is keeping us relevant this season and long may that continue till we have another piece of silverware in our hands.

This was Arsenal’s first win over Sheffield United in three attempts and the value of this victory should not be under estimated. Arsenal produced a mixed performance on the day and did enough to get by. Next up is Manchester City and I think we should leave that to a side because I don’t want to dampen a good win.