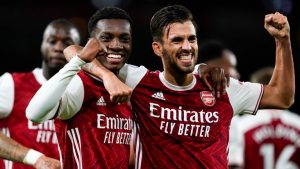 Arsenal followed up the impressive opening day win at Fulham, with their first home win of the season by beating fiery but toothless West Ham in late Saturday kick-off.

The scoreline ended 2-1 in favour of the Gunners with strikers Lacazette and later his replacement Nketiah getting on the scoresheet. For a long period though it felt like the evening would end in frustration with score poised at 1-1 and West Ham causing some issues on the other end. But one brilliant movement and pass changed that into delight.

Ceballos who had remained static for majority of the game suddenly decided to make a little run in behind the defence which was superbly picked by Saka to set him free and the rest was a simple cross and tap in from the young Englishmen to give Arsenal the winner at 85th minute mark.

But not for the first time in Arteta’s tenure, the scoreline was not matched by the performance. And this was evident by the way Arteta chose to celebrate these 3 points. Arsenal truly got away with a horror show and David Moyes was left wondering how he still wasn’t able to register his first blood at Emirates. And after this game, I don’t think he will ever be able to…

Considering that we were at home against a team who was going to play a low block against us, Arteta decided to go with extra creativity. The issue is that his version of extra creativity is picking Saka and Ceballos over Niles and El-Neny. To his credit, his changes did made a significant impact in both goals but the issue was that they hardly did enough all game to assert their authority in midfield both in terms of control and creativity as time and time again West Ham was the one who set the tone at our own home.

West Ham came off the blocks quicker, they possessed a greater threat than us and they dominated our midfield and forced us to drop deep on many occasions. But having said that, they were unable to do much with it and often lacked the killing instinct and albeit this was the major difference between the two sides that decided the game.

Even though Arsenal had a quiet first quarter of the game but the moment a bit of brilliance came on display the moment everything ticked. For first goal, Saka was able to provide this spark when he found a little pocket of space and threaded a beautiful first time ball for Auba to run clear, whose near perfect cross was expertly dispatched by Lacazette. His 50th league goal in red.

It was a sucker punch for Hammers as Gunners from nowhere found themselves ahead. West Ham though, continued to threaten and on any other day might have got a penalty when Gabriel handled the ball but it was rightly not given.

But just on the stroke of the halftime, they found themselves level. Bowen was a constant threat on the right and Kolasinac who was only playing due to Tierney’s warmup injury and Saka made a mess of it as they allowed him to run free and feed Fredericks in ample of space to play a low cross for Antonio to tap in his 9th goal in 9 appearances. It was probably a fair scoreline at half time.

Second half provided no difference in action. Arsenal racked up meaningless numbers in possession with little to no creativity and West Ham giving heart to mouth moments for Arsenal fans. They once again showed that the thing Arsenal dreads the most are the crosses into the box. Some claim that Martinez was much better goal keeper in this regard. Well let’s wait and see.

Hammers not only outshot us but for few periods they absolutely hammered us. But they could only get as close as to the cross bar for their second. Antonio also would have felt that he should have got his second but it wasn’t to be.

And once again, the difference was in the killer instinct or the offensive quality on display. Where Hammers created more opportunities and failed to make anything out of them, Arsenal needed only one which they duly dispatched.

In terms of XG, West Ham outscored us by 2.06 to 1.33. Some will claim that winning ugly is a mark of a great team but then so said we all under last Spaniard. The bottom line is that despite all the defensive signings, Arsenal still lack a formidable midfield to challenge for Top 6 let alone Top 4. We need a replacement for Ramsey at least and if that doesn’t change in this window then we should either let go of our ego and bring Ozil back or set ourselves up for more nights like this.

But one thing is for sure, we can’t ride our luck for long playing like this and keep the momentum going on the basis of just few games of last seasons FA Cup run.