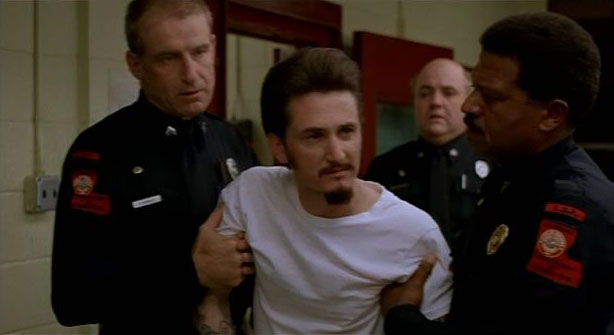 Sean Penn being taking on his final walk, the inevitable fate of Mikel Arteta?

After Sunday’s emphatic 2-0 loss to Spurs in the North London Derby (NLD), it is my considered view that Mikel Arteta is a “deadman walking” in terms of his career as manager of Arsenal FC. It is just a matter of time before he is figuratively carried out on the gurney and given the capital punishment of a failed manager.

It is not the margin of defeat, rather it is his strategic and tactical blunders over the past 12 months since he was given this leadership role. Am not tired of reminding readers that, like many, I was overjoyed when Arteta was given the job as coach and subsequently promoted to 1st team manager. He started off sounding the right notes. Never forget his promise:

But I recognized something was amiss and directly contrary his promises, when after Project Restart he stopped selecting Mesut Ozil to the squad, not merely the starting XI. How can you be “dominant” and “play in in the opponents territory” if your best player and attacking midfielder is dropped for no good footballing reason?

Apparently empowered by his FA cup success and victory in the Community Shield, playing a negative, counter-attacking style, described by my friend Blackburn George “as accepting that Arsenal is inferior to the opposition”, Arteta at the beginning of the season proceeded to outright ban Ozil from playing for the club by not registering him in both the Europa and Premier League squads.

In my blogs as well as podcasts with the Arseblagger, I repeatedly warned this was a fundamental error by Arteta (and his bosses) which he would regret. It is an iron law of team sports; you cannot succeed without your best player.

Now the chickens have come home to roost. As an Arsenal manager, you don’t go 6 defeats in 11 games to start a season without consequences. Even Bertie Mee, manager for 10 years, who led Arsenal to league and cup doubles in1970-71 and an European title (Inter Cities Frairs Cup)had to resign at the end of 1975-76 after a similarly disastrous start.

Mikel Arteta has nothing like Bertie Mee’s accumulated goodwill. And those were the days when the Arsenal board was loyal to their managers, come hell or high water. Does anybody believe the Kroenkes share a smidgen of such commitment to Mikel Arteta?

One year after getting the job, Mikel Arteta is floundering like a fish out of water, despite the brave face he is putting on at every presser following defeat after defeat. After 9 games he came under heavy pressure by the media and many fans (not the least being the Uncensored Arsenal podcasts) for the club coming dead last in the PL for shot creation.  His response against Wolves was to have his team pump in 33 crosses. Shot creation went up to a season high 13 but there was a paltry 2 shots on target. In his presser he defended his tactic and promised more:

“More than the situations we create or not is the final ball that we deliver when we are in this situation and the amount of times that we hit the target with the situations that we create, which is not enough. It’s down to me to find this solution, to put the players in the right positions and do it better.”

He certainly stuck to his guns. Arsenal pumped in a whopping 44 crosses (that must be a record but I don’t have access to the historical data). The end result was even worse than Wolves; 11 shots, 2 on target.

Despite the futility of this emphasis on crosses, Arteta in the post-match was by no means contrite. In his own words:

“In terms of the performance they did everything that I asked them to do, absolutely everything. We played a way that I believe we had to play this game.”

Arteta was ridiculously blind to the fact that pumping in crosses was even less successful at Spurs than it was at home to Wolves:

“We had chances. We generated probably more than ever this season, put the ball in the box more than ever, we had numbers there but at the end of the day you have to score the goals.”

No Mikel; you had less shots created and less shots on target. At that rate you are not going to score many goals.

“I take a lot of positives from the way we played”

Arteta is therefore making it clear he is either unwilling or unable to play down the middle. His system has no need for clever, attacking midfielders playing through the opposition’s lines. Rather it will be diet of cutbacks and crosses going forward.

I thought about it and can only conclude Arteta is wedded to the way he used to play at Everton, slinging in crosses for Big Duncan Ferguson and Tim Cahill who were both good headers of the ball but limited footballistically. Unlike Arsenal, Everton had the players for this style but at the end of the day they were proverbial also-rans in the Premier League never coming higher than 5th usually 6th. The wheels fell off around the time Arteta left and then, shortly after, his coach Moyes who spectacularly failed at United as successor to Sir Alex.

If we are going down the old Everton road under Arteta, God help Arsenal. As matters now stand, being at 15th place, we run the risk of being dragged into a relegation scrap. While my good friend Mel o’Reilly sincerely believes Arteta needs more time, which I disagree with, I absolutely concur with his tweet that our next game against Burnley is a six-pointer.

Let’s not beat about the bush,next week against Burnley is a 6 pointer.

Frankly Burnley will be up for it. All those years of coming to the Emirates and never getting a win has had Sean Dyche moaning at every injustice. Am sure he will be licking his chops and preparing his team for a style of football English clubs relish.

But is not only Arteta bravely whistling past the graveyard, it is also those 80s and 90s ex-pros who dominate mainstream media as pundits, For years they slagged and criticized Arsene Wenger for not emphasizing good old-fashioned crosses into the box, of wanting to walk the ball into the goal by patient, clever build-up play, for emphasizing technically accomplished attacking midfielders over physical DMs and defenders, and for not breaking the bank and spending some “fucking” money. In Arteta all their dreams have come true. They are now the main cheerleaders of Mikel, applauding him for banning Mesut Ozil, clearly happy that Arsenal best player cannot represent the club. Moreover they love the style of football Arteta insists on.

Every game on NBC, I hear pundits who used to play for other clubs who fiercely competed against Arsenal, i.e. pundits who got multiple trashing from Wenger’s teams, cheering Arteta on.

Jim Beglin, ex-Liverpool, who was on my broadcast feed when Chelsea was toying with us after going up 1-nil had this to say:

“Arsenal shouldn’t be too downhearted, they are playing well”

Last week vs Wolves, Efan Ekoku, ex-Norwich and ex-Wimbledon among many clubs, i.e. a journeyman, was assuring Arsenal fans:

“This is the pain they have to go through. Arteta will be looking ahead two years.”

I am not buying their bullshit but if you do I have a bridge am willing to sell you as well.

At the end of the day my opinion really doesn’t matter. It will come down to the Kroenkes. They didn’t do this Leveraged Buyout of Arsenal to make it a play-thing. Kroenke, who is 49th wealthiest billionaire in America,  is remorselessly growing his net worth through the passive increase in value of his various assets such as Arsenal Football Club. He won’t be having Arteta drive down the value of his investment.

For that reason Arteta’s days are numbered. Hand wringing and righteous indignation by fans about the frequency of changing managers won’t help Arteta in the least. Stay tuned for the next chapter.