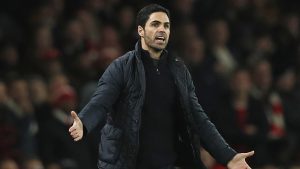 So in the most recent podcast by yours truly and Blackburn George, we made the somewhat radical suggestion that for the rest of this year Arteta and Arsenal should forget about top-4/top-6 in the league and focus on the cups. By the way, winning the Europa League would be a ticket to the champions league, although that was not the point we were trying to make. Our concern, after trying to be as objective as possible, was the squad was not strong enough to make a decent run in three tough competitions between now and May and that Arteta needed to prioritize.

From the onset of that discussion in the pod, we both agreed that this position would not be popular among Arsenal fans.

Arteta can walk on water

It is clear to me the current mood among the vast majority among Gooners is Arteta can walk on water. I sense a feeling he can transform the fortunes of the club just as he did after the infamous last minute “trolley-dash” at the start of the 2011-12 season. Prior to his arrival, there was a familiar mood of pessimism around the club after the 8-2 shellacking by Manchester United with Fabregas and Nasri bolting for greener pastures. Arteta was the player central to restoring stability and driving us to top-4 at the end of the season.

Similarly during the “Emery-degeneracy” many fans had lost almost all belief in the club. Pessimism was at a new low. Seven straight games without a victory and there was the prospect of being dragged into a relegation scrap half-way into the season. But the mood has swung almost 180 degrees since Arteta’s appointment as head coach in early December.

There has been a clear transition to a more attractive brand of football with improvements in both attack and defense. As a result the pendulum has swung dramatically in favor of those who believe that a march up the tables to top-6 or even top-4 is imminent. Such feelings are always heightened after defeating the old northern “enemy” Manchester United as we did at the turn of the New Year.

We share the much of the optimism about Arteta’s appointment. In fact George was one of his most fervent advocates, using his blog and twitter to loudly bang for his appointment to succeed Arsene Wenger. But as we frequently observed in almost all our podcasts since September, replacing Emery would be no “quick-fix” to changing the fortunes of our club, regardless of the caliber of coach appointed.

Decimation of the squad

Not only was the coaching and tactics a disaster and completely inimical to the Arsenal-Way but I would argue more profound damage had been done to the club over the past 18 months in terms in terms of transfers-in and transfers-out. The playing squad had been decimated as a result of decisions made by the executives of the club led by director of football operations Raul Sanllehi.

This was most exemplified by the decisions in the summer of 2019 to eviscerate the club of its most experienced and accomplished veteran players.
• Ramsey, 28 yo
• Koscielney, 33 yo
• Monreal, 33 yo
• Mikhitaryan, 30 yo

Add to this list are almost all the squad players (Cech, Ospina, Elneny, Welbeck) already out of favor who had their departure hastened. No serious PL team with top-4 expectations can afford to bin all its veterans in one go and expect to seriously compete over a long season.

How much Arteta would give to now have a couple of those veterans able to play at least one game per week to supplement the callow inexperienced youth he currently has on the bench?

Arsenal squad is the youngest

The PL statistics bear me out on this. The current Arsenal squad, at 25.1 years, is the youngest by average among all 20 clubs. Even the supposedly youthful Chelsea, banned from the transfer market, has a squad which is more than one year older. To me it is no surprise that with such a young squad we are struggling for consistency especially when top-players cannot feature. 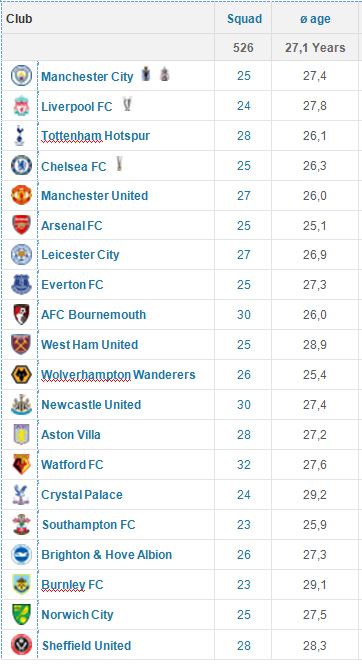 Kids such as Martinelli, Willock, Reiss-Nelson and Saka will take time to improve. As he has done with Maitland-Niles, Arteta will improve his players but that is not a short term program and no guarantees that their abundant potential will be fully realized. To expect them to be consistent and effective in three competitions over the next five months is not realistic.

Paradoxically some of our best players are now getting long in the tooth. Ozil at 31 years old cannot be expected to runaround as he did in his 20s. It won’t be too long before Aubameyang at 30 yo begin losing a step which is one of the greatest assets of a striker. David Luiz at 32 years old may not need Aubameyang’s explosiveness to be effective but how soon shall the bell toll. Age makes them less effective if Arteta is forced to run them into the ground in the coming months.

Already injuries and suspensions have taken their toll with Torreira and Aubameyang likely to be absent from our next PL matches. Time is already vindicating Blackburn George. Something has to give. Giving equal weight to all competitions will inevitably mean failing at all three. I stand by our recommendation; Arteta needs to prioritize.