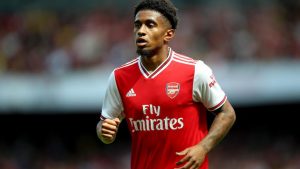 Despite a valiant effort by Championship club Leeds, they were unable to upset Arsenal in last night’s FA cup encounter. The home team scored their winning goal 10 minutes into the second-half, demonstrating their newly found resolve and commitment that seemed completely lost six-weeks ago under their prior head coach.

After nearly four weeks, everybody connected to Arsenal Football Club seems to be fully in the grip of the Mikel Arteta honeymoon. Going by the tone of the commentary on the Arsenal Player and the fan mail they shared, despite a lousy first half when Leeds outplayed the Gunners in every department, most fans seem convinced Arteta could pull a rabbit out of a hat.

The first half stats were dire from an Arsenal point of view. Leeds fired 15 shots at goal vs 2 from the home team. I saw a stat close to the 45 minute marker where Arsenal had only 40% possession. The Leeds press, so loved by Bielsa, worked like a charm as the gunners gave the ball away cheaply inviting pressure from the opposition. It would be churlish to single out any individual, something the currently dormant scapegoaters love doing when team is on a bad run. But it was self evident that without Torreira as DM and Ainsley Maitland-Niles at right back, the team lacked the composure and tactical nous that was so abundantly on display versus Chelsea and Manchester United.  Instead Arsenal could barely string passes from back to front with Ozil rarely seeing in the ball in the spaces from which he loves to operate. Nil-all at half-time was a very flattering scoreline if you are a gunner.

Apparently Arteta is a master motivator or very good at applying the hair-dryer at full blast. That was the conclusion of the experts at Arsenal Player, none of whom made it into the dressing room but that was their narrative when commentary resumed. It appeared to me the biggest adjustment was to become a little more compact by pushing the backline further upfield, especially the two fullbacks (believe it or not that included Sokratis) and letting the three forwards drop deeper to receive the ball with Ozil roaming behind.

The impact of this tactical change was to completely reverse the tide from the first half. Straight out of the traps, Arsenal took the offensive with wave after wave of attacks, creating chances and forcing saves from their keeper or near misses. Leeds, like most of Bielsa’s prior teams, seem to run out of gas as the half progressed and were rarely able to maintain the press they employed so effectively in the first half. The only goal scored came from one of these attacking moves by Arsenal with Pepe cutting inside and finding Lacazette to his right who crossed to Reiss-Nelson steaming in from the left. He calmly lifted the ball over the onrushing keeper.

While Leeds huffed and puffed for an equalizer during the rest of the half the Arsenal defense stood firm, bending occasionally but never breaking. Holding, in particular, caused some conniptions with some wayward passes from the back leading to chances for Leeds but his team-mates were resolute. Late in the half, Sokratis decided to demonstrate his talents as a marauding fullback, using his hulk to shield the ball, much to the annoyance of the opposition who decided they would be true to their tradition of being “dirty Leeds”. This forced Joe Willock to come to his defense in the ensuing handbags.  A bemused Anthony Taylor refused to be dragged into showing cards for this bit of theatre, leaving the Greek to trundle back to his customary position and help negate any late flourishes from the West Yorkshire team.

The final whistle showed a clearly relieved Arteta bounding on the field to congratulate his team for a hard won victory. He might be thinking to himself, how can he sustain these performances with the finely tuned 1st Eleven he has whipped into shape in less than three weeks but having questionable quality on the bench. He is now competing on three fronts (PL, Europa and FA cups) and going by Leeds, unable to play his best players week-in and week-out, how long can the honeymoon at Arsenal last.

It should be a question on the the mind of supporters of Arteta and those who regard his appointment as head coach as critical to the future of the football club.