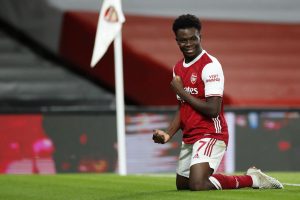 Brighton game was a pretty big one for Arsenal. It was a genuine 6 pointer away from home and against a team that has been struggling this season, it provided the Gunners with a good chance to build up momentum on back of their win over Chelsea.

And by hook or crook, Arsenal did it. A typical old fashioned smash and grab 1-0 victory which saw Londoners win back to back for first time since September. Moreover, it came through a goal scored from open play (the rare of rarities).

All of this made possible by the brilliance of Saka in second half. It isn’t unfair to say that he alone changed the fate of the game in favor of Arsenal when he picked up a hopeless ball in midfield, beat his marker with a sharp turn that left him for dead, accelerated down the wings to setup a perfect opportunity on the counter attack. It was duly dispatched with great accuracy by Lacazette. Arsenal created only 2 chances of note in entire match and both were architected by Saka.

After Chelsea game, the expectation was there would be improvements seen on a consistent basis in the play of Arsenal. But that was hardly the case at Falmer Stadium. Arteta decided to bring back Aubameyang in place of Lacazette and it seems to have completely changed the whole way we play.

Instead of fast paced first time passing, we were back to our slow, timid and boring football that saw our defenders dictate possession and our midfield and forwards wander into nothingness. Hardly anything was created and for most period Brighton were able to pin the Gunners deep in their half and pose genuine threat on Leno’s goal.

This was a team who had only won one home game in entire 2020 (that came against Arsenal) and they dominated us. And if they had showed more patience or executed a better final third pass, then they could have easily taken the lead as well. But they didn’t even though the Gunners provided plenty of opportunities with their lackluster and sloppy passing.

This lack of cutting edge should also raise few questions about the six (6) changes that Potter made to his side for this game that saw attacking players like Maupay, Trossard and Welbeck miss out.

Despite Brighton’s lack of attackers, credit must be given to Leno who made some decent saves to keep his side in the game. After all this was the fixture that proved so heartbreaking for him last season.

Arsenal registered only one shot on goal in first half and that too was from a free kick. Second half saw improvement in that regards as Saka became more dominant and dictated play.

This saw Aubameyang with a clear goal scoring opportunity that he missed from 5 yards out. Moments later, a change was made by replacing Martinelli and it saw an instant impact through the French striker as Arsenal took the lead.

In between, Brighton perhaps got their best chance of the game via a corner but Dunk was unable to put a finish on it. There were claims for a penalty but VAR ruled it out.

But for both teams, chances were rare and the game became pretty simple for Arsenal from their on. Sit back, defend, look to frustrate and counter. This is something that Arteta seems to be master of and this is also something that this side seems comfortable doing as well (De-Arsenalisation).

Brighton searched for an equalizer later on through attacking substitutions but they hardly made a difference and the game slowly came to a close. Brighton lost their 16th game of the season and Arsenal went up to 13th with 20 points (halfway towards that magic 40).

It was an important 3 points without a doubt. But still in the bigger picture, one should look beyond that.

On one hand, it was a tough away fixture in which we battled hard against a relegation rival and won. It helps us win two on the bounce and generate some momentum for next games. Some will say only points matter in the league.

On the other hand, we need take a deeper look at the performance. We are in December and this is a period where generally performances matter as much if not more than the points. But for Arsenal its the other way around; performance  is lagging behind the points. This speaks volumes of our disastrous campaign so far. Awful performances will eventually lead to dropped points (ask Unai Emery – Editor).

Brighton was a continuation of that, the only difference being that we were lucky that they failed to make anything of their chances and we had a player in Saka who was on different wavelength then the rest of the players.

The tactics again were confusing and it was hard to see what exactly we wanted to achieve. It’s no coincidence that the games that we have won this season (apart from Fulham, maybe) have all come due to individual brilliance or once in a blue moon type performances like Chelsea. And this does not paint a pretty picture about the potential of this squad under Mikel Arteta.

This also bring me back to the point I made regarding De-Arsenalization in my earlier blog.

The choice is yours.