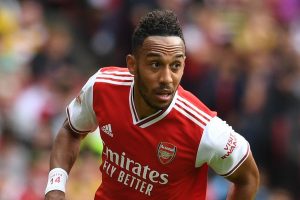 Aubameyang: 2 goals and an assist was kicking ass.

Arsenal’s first home game in over 3 months. Any apprehensions of the players being a little rusty were dispelled early, as the passing was easy and quick right from the start.

Wish the same could be said for the TV producers. Some action was missed because the camera was focused on something else, and the replays were brought to you by the “Hunter S. Thompson Experience”.

The Experienced Goalkeeper of Norwich had a bit of a moment when Auba closed him down. Krul’s “Cruyff turn” went wrong as the Gabonese won the ball and passed it into the empty net, with quite a flourish for the cameras. Which by then were working fine. 50th PL goal for Aubameyang. 1-0 to the Arsenal with just over half an hour gone.

Five minutes later Arsenal eased any fears that Norwich would launch a comeback. Unlike the recent past, the Gunners refused to show any generosity to a struggling team and Norwich are really struggling. They haven’t won a single point from a losing position all season in the PL. David Luiz’s long diagonal ball to Teirney was a thing of beauty. He found Auba who turned it around the corner for an onrushing Xhaka to score a quite wonderful finish. A proper striker’s goal from the midfielder. His joy was clear to see.

We’d been untroubled by the Canaries for most of the first half. Pookie Bear and Todd ‘Discount Griezmann’ Cantwell were mostly anonymous, while Maldia was reduced to being a minor pest with his fouls. Godfrey did come close with a brilliant snapshot from Hell (location: centre field, 33 yards out) only to be denied by the post. A free kick from Bruce Willis’ ghost of Christmas past, and a couple of corners tested our fragile set piece defense late in the half, but we held on.

Norwich started the second half with 3 substitutions and a change in formation, which led to them dominating possession. Arsenal meanwhile had sent on Holding for Mustafi. It was mostly comfortable, but Norwich were growing in confidence and Arteta decided to change it up. He brought on Willock for Nelson. It took a few minutes, but Arsenal gradually reasserted themselves. A good counter attack saw Willock with a shot. Soon, a Norwich throw-in turned into another gift for Auba as a careless backpass found him. He calmly took a touch and buried it. A potential Golden Boot beckons again.

Todd Can’t Dive Well enough to get even Mike Dean to award a penalty against Arsenal. He’s been linked with us, but this was a very strange audition from the supposed Arsenal fan. He went off in tears seemingly having injured himself stretching for the ball. Speaking of Arsenal targets, two of the boo-boys’ favourites – Lacazette and Bellerin- were taken off and replaced by Nketiah and Cedric, the Entertainer, making his debut. Vinai was certainly amused (and gave a nod to Edu) when Cedric fired a left foot shot through a sea of canaries into the Norwich goal. Might be the quickest debut goal by an Arsenal player.

Auba was denied his hat-trick when he was replaced by Pepe. It led to a great moment, though, when he ran up to a beaming Xhaka to give him a hug and the armband. Delighted not just for Xhaka’s redemption, but it’s nice to see him and Aubameyang get along so well.

Neat footwork from Nketiah created an opening for Willock who almost curled in Arsenal’s 5th. Norwich substitute with a name that sounded like Rancid put in a toxic foul on Willock before punching the pitch in frustration. They added further to their yellow card count as Arsenal added to their passes before the referee called the game to an end.

Arteta’s biggest victory, matching the 4-0 result against Newcastle, and there are some encouraging signs. It might have been against the bottom placed club in the league, but we’re seeing growing fitness, confidence, and tactical familiarity.

Up into 7th, at least until later today when Sheffield United play Spurs. 6 points away from 5th, 8 away from Ugly Kit Chelsea whose Gunnersaurus gambit saw them lose to West Ham, conceding 3 goals in honour of their sponsors. The season is drawing to a hectic, but exciting end and I’m enjoying the ride again.