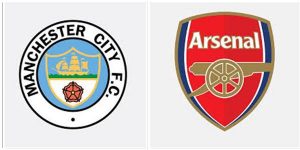 It’s been more than 3 months since Arsenal last played. For a while it looked like the season would need to end prematurely. But thankfully, it seems the effects of the virus have not been as bad as earlier feared. Not enough anyway to override the profit motive of the PL, who have decided to end the women’s league. (Money talks – Editor)

Cynicism aside, I am really pleased to have Arsenal back. It may not be a new season, but it almost feels like it. A similar sense of excitement, and also no real idea of what we will look like once we get to the league. Highlights of a couple of friendlies are all we got. But hopefully, this break has allowed the Arsenal players to get more familiar with our new manager and his methods. The players have been given regular assignments and training programs, and I must say, they came back looking quite fit.

I wonder if that will also be the case for our opponents, the previously unstoppable ManCity.

Of course Pep Guardiola is Arteta’s mentor and famously demanding of his players. So you can be sure that he will have done the same for them as Mikel has done for ours. But will those players have the same desire? Soon to be unseated as Champions and nothing left to fight for in the league, the Champions League would be their dream. A European ban looms though, which could be either a motivating factor, or lead them to be distracted and question their futures at the club.

Arteta of course will not make the mistake of underestimating the team he spent 3 and a half years with and knows all about. I’m sure it will be somewhat of a surreal experience for him, but I’m looking for him to give us an edge in a way similar to how he was for City when facing Arsenal.

This is a difficult game to start things off for Arsenal, but no less important. We’re currently in 9th place. A win would see us overtake Tottenham in 8th, and draw level on points with Wolves, both of whom have played a game more. Sheffield United are 3 points ahead and play Aston Villa before our game kicks off.

The top 4 race keeps it interesting and is important from a financial perspective. But I don’t believe this season needs to be about that. All I’m hoping for is to see us play some good, entertaining football. See us build our style of play, develop our youngsters, and have a ready platform to build on next season. If we can gain a CL spot, and/or the FA Cup along the way, that will be a bonus. For now, I’m just happy that Arsenal are back. It’s been a long 3 months, but hopefully, it’ll have been worth the wait.

Things to look out for:

It’s a new world and a new start, and I will be making no predictions about the starting lineup going forward. A losing proposition anyway. As are score predictions. But just as a bit of fun, I have a sneaky feeling we’ll win this. Martinelli to score the winner.