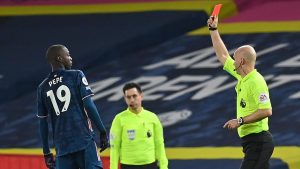 Back in the day going, to Elland Road to play Leeds was definitely a match-up of “The Beauty and The Beast”, “dirty” Leeds versus the silk and elegance of Arsenal. It was a match-up made in heaven for the mainstream media and their echo chamber especially in the ex-colonies, where I originally hail. In those days the English media would simply gaslight their local audience with a narrative that Arsenal was made up of soft, foreign players going to Yorkshire to play real men who were not afraid to get in the opponent’s faces. It was a fake narrative but it was successful in gaining newspaper readers and TV viewers as well as stoking the historical north-south divide in England when it comes to football (and politics).

But the truth is in those days Leeds was a long ball team with the personnel to match. I can recall as a young boy, during the 1970s, they were in their pomp always in some cup finals or other. Fast forward to the modern era and I well remember the likes of Mark Viduka and Harry Kewell going up against Thierry Henry and Patrick Viera;  the gulf in class was a chasm. At the time Arsenal played attacking one-touch football with the principal aim of creating chances and scoring goals. In contrast, Leeds main tactic was to kick Arsenal and prevent us from playing our game; their chief attacking weapon was long balls to Viduka, a big bruising center-forward from the old school.

Fifteen years later the roles have been completely reversed. Arsenal may not be a long-ball team, in the old tradition, but we are certainly not a positive attacking force. Arsenal mostly sit deep in their own half laboring to get the ball into the opposition half seeking to create chances principally  for Auba. Occasionally Pepe is allowed to come inside and take a shot, i.e. when he is on the pitch, which is not often these days compounded by his foolish red card today.

Leeds is the complete opposite to Arsenal. They are up-tempo, attacking the opposition at every opportunity, making passes, creating overload, always seeking to make chances for Bamford or their midfielders late arriving in the box. None of Leeds’ players have long CVs with years of playing for big clubs or of representing FIFA’s top national teams but they play with an imagination and fearlessness which used to be associated with Arsenal. They are fast becoming a favorite team of neutrals. In today’s encounter with Arsenal it was easy to see why.

The game’s headline stats from the Premier League web site may keep Marcelo Bielsa sprightly and younger-looking for some time but they make ghastly reading for any Gooner. In my case it is helping to destroy the youthful optimism I once had watching our team play.

In every attacking metric Arsenal was handily outplayed by Leeds. They had twice as much possession, nearly 100% more Passes and had 160% more touches. Arsenal used to be league leaders in these stats until recently, that is before Man City started buying up all the best Attacking Midfielders they could throw money at. Even then Arsenal was never inferior as a footballing team to a newly promoted club from the championships.

Now the “loyal” defenders of the club will rightly say the attacking stats are skewed because we were down to 10-men after 51 minutes and had to sit back and let them have the ball. But which fan can honestly say Leeds wasn’t the dominant team from midway the first half. If the truth be told, Pepe lost his head because he had been playing badly and had been totally frustrated by Alioski up to that point.

Leeds’ 25 shots versus our 9 is no aberration. Being out-shot  is typical of Arsenal these days. At least we doubled the 4 and 5 shots we made against United and Villa respectively. Four of Leads shots were on target, not counting the four that either hit the post or crossbar with the keeper beaten. Thank heavens Leno was on top of his game as most of those shots on target required top-top goal-keeping to save Arsenal’s blushes.

But even more astonishing, on the defensive side they also out-hustled the Gunners with 18 tackles versus 10. Typical of a Bielsa team, they are tigerish and ferocious when out of possession, pressing and harassing the opposition when. It is the secret of their success. Given the energy they expend one wonders if they can sustain this over the next 30 games.

Bottomline: Arsenal could do with some of the bravery and freedom the Leeds manager grants his players, in and out of possession.

Finding a scapegoat after rearguard action

Far from me to deny that Arsenal played better when down to 10-men. I tweeted during the game:

Down to 10. No problem for Arsenal. We are now used to playing defensively.

Often with 8 in a line strung across the penalty box, Arsenal was able to successfully frustrate Leeds who, as energetic as they are, did not have a quality #10 who could provide line breaking passes or run clever combinations that could free Bamford and company. In addition the Gooners were able to counter with maybe three players at best, primarily the combination of Saka and Auba. The result was at least two excellent chances, the last of which Saka should have put away but but the goal keeper forced him to the left and made a brilliant save.

This successful rearguard action is the straw which Arteta is now clutching. I grant you he has no other option. Afterall every manager has the right and the duty to find positives out of every game and build on it. But is drawing with Leeds, the 2nd place team from the Championship good enough? Is being outplayed in every attacking category a positive omen?

Overshadowing all of that, Arteta took the option, forbidden to every manager, of using his post-game presser as an opportunity to publicly bash his player, Pepe, for doing something I am sure Pepe knows and we all know to be stupid. Plus Alioski made a meal of it, but that is modern football.

Yes it was “unacceptable” but surely all Arteta has done is to make his own player a scapegoat for a team-wide poor performance. Surely this cannot be good for the club going forward.

In retrospect, it was not merely a bad game of football for the Gunners, but once again Arsenal’s tradition of class and integrity took another blow from its manager. For anyone who takes their family or organization they are affiliated with seriously, be reminded that values are:

“the principles that help you to decide what is right and wrong, and how to act in various situations.”

Without values Arsenal, as we once knew it, will surely perish.