Slowly but surely some Arsenal fans, especially the self-appointed pseudo experts who dominate the podcasting and video-blogging sphere, are back to their old habit of finding a convenient scapegoat for the difficulties that face the club.

With Arsenal passing through hard-times, the opportunists and attention-seekers cannot help themselves. This is the perfect opportunity to point the finger of blame at a convenient target.

The club is going through its worst spell in decades. After 25 matches in the EPL season we are 10th in the tables with 6 wins, 13 Draws and 6 Losses. It is the worst series of draws by the club in over a hundred years. Although it is universally accepted that the quality of football has improved under new manager Mikel Arteta, results are yet to catch up with performance. After six EPL matches under the new boss the scorecard reads 1Win, 4 Draws and 1 Loss.

A certain powerful, scheming American politician once said “You never let a serious crisis go to waste.” Thus it was not surprising to me when a certain podcaster finally voiced something he had been hinting at for weeks, i.e. Mesut Ozil is the reason why we are not winning games and the club should move him on. Apparently because Ozil has only one assist so far this season he is the problem.

Seems to me this podcaster and his cohorts are of the belief that, because he is the highest paid player, Ozil should be the “Roy of the Rovers” type of midfielder carrying the club on his back. Thus apart from being our best passer, he should be a ball carrier, box-to-box phenomenon and goalscorer. The fact that the German has always been a technician who excels in finding space, receiving the ball and then making the perfectly weighted pass does not seem to matter.

Decimation of the Arsenal midfield

Yet this is the crux of the matter. Over the past 18-months the Arsenal midfield has been decimated, eviscerated by Unai Emery and his boss Raul Sanllehi. When Wenger left at the end of 2018, the active midfield comprised Ozil, Ramsey, Mikhitaryan, Xhaka, Iwobi and Elneny with Maitland-Niles on the fringes. Cazorla and Wilshere were out with long term injuries and Jeff was on loan. By the beginning of the 2019-20 season the only ones left of that group was  Ozil, Xhaka and AMN. All the others had been sold or let go on a free. Among the losses was the football crime of the century, i.e. the failure to make a penny from the loss of a certain Welshman, who was among the best box-to-box midfielders in England.

Without a balanced team that comprises a phalanx of excellent midfielders, who will allow him to float into space and receive the ball, Mesut Ozil cannot excel. This is a historical fact borne out by Ozil’s record of assists in the EPL since he joined Arsenal at the beginning of the 2013-14 season. 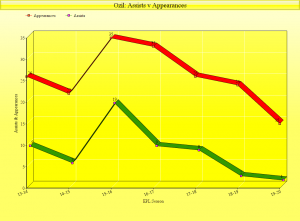 The clear impression from the data is that Ozil excelled during the Wenger era. Even when the club struggled to 5th and 6th place in the Frenchman’s last two years, even when Ozil struggled with a chronic back injury in 16-17 and 17-18, he still finished in double figures when you combine goals and assists; 9 assists/8 goals and 8 assists/4 goals respectively. In contrast ever since the Unai Emery/Raul Sanllehi era, assists and goals have have plunged cliff-like to 2 assists/5 goals and 1 assist/0 goals over the past two seasons to date. In the era of Emery’s “respectball” the midfield was treated like China since the  corona virus, a place that may be important but to be avoided as much as possible. No wonder Ozil’s production has dried up just as it has in China.

Just to amplify the point about Ozil needing a supporting cast around him, especially in midfield, this was more than evident in 2015-16 when he had that phenomenal record of 19 assists and 6 goals. In that midfield was the following:

In contrast, the 2019-20 midfield is no comparison in terms of talent and experience:

Of the current lot only Ozil and Ceballos are designated attacking midfielders. Compare the current class to Rosicky, Arteta, Cazorla Ramsey and Wilshere who could advance the ball with either their passing or dribbling thus finding Ozil in space.

Frankly I doubt none of the facts I have raised above matters to the scapegoaters. They are very much the same people who convinced themselves for many years prior to his departure that Arsene Wenger was holding back Arsenal and any replacement would make us better. Just look where that got us.

An American writer, Robert Heinlein, said about humanity, that “stupidity is an incurable disease”. The full quotation is worth posting:

“Stupidity cannot be cured with money, or through education, or by legislation. Stupidity isn’t a sin, the victim can’t help being stupid. But stupidity is the only universal capital crime; the sentence is death, there is no appeal, and execution is carried out automatically and without pity”.