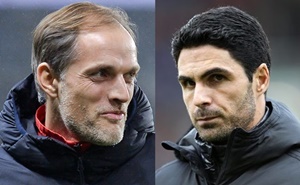 Chelsea take on Arsenal this evening (UK time) at Stamford Bridge with the FA Cup final looming on Saturday and fresh from hard fought last minute victory this past Sunday over fellow Champions League finalists Manchester City. How seriously will they take Arsenal given that their 4th place Premier League position seems comfortable but not unassailable? West Ham is 6 points off the pace but arguably the greater threat is Liverpool, 7 points behind with a game in hand.

Unlike the media brainwashed lemmings in the Arsenal fanbase, who for years sneered and jeered Arsene Wenger for stressing that 4th place is like a trophy, given the riches and prestige of participating in the champions league, I would not be surprised if Chelsea put out a relatively strong team for today’s game. The professionals in charge of Chelsea know their jobs are on the line if they fail to secure top-4 and get into Europe. Roman Abramovich will not take kindly to losing at least £100m for getting anywhere close to the champions league final.

Furthermore Premier League prize money is substantially different depending on final league position. Last year the Blues earned £143m for 4th place in contrast to Arsenal’s £134m at 8th place. That extra £10m, if Arsenal had it, could have been used to mitigate the wage cuts and redundancies last summer or even help pay Partey’s salary (for kicking balls outside the stadium, what a lucky boy.)

In contrast, should Chelsea win the FA cup on Saturday they will only make £1.8m, and, by losing the prize is a paltry £.9m. I agree that the prestige and romance of winning the FA Cup is significant but as was evident recently by the tawdry, sneaky way the top-6 clubs in England attempted to participate in the European Super League at the expense of English football, they care more about money than romance.

The thing that most annoyed me over the years is how Arsenal fans took top-4 and participation in the Champion’s League for granted. I remember haughty, arrogant big bloggers and tweeters complaining how they were tired of losing in the 2nd round to Bayern or Barcelona. Now they can only dream, hopelessly, of ever participating in the competition especially since we were just kicked out of the Europa League finals and have no European football next year.

To a large extent this stupidity was aided and abetted by the mainstream media who relentlessly belittled getting into top-4 and helped turn the fans against Wenger, who, despite being only 9th or 10th in transfer spending in his 22 years was able to consistently produce a champion’s league team with far less money than his English peers.  Meanwhile the media glossed over the unfair advantage enjoyed by the sugar-daddy clubs like Manchester City and Chelsea who for the last 10 years have won 7 premier league titles.

Unlike the naive and feckless at Arsenal, when it comes to managers at Chelsea it is the results that matter. Thus after Boxing Day, last year, when Chelsea were spanked 3-1 by the Gunners, they did not faff around and give their failing young manager more time. 15 months into the job and they had seen enough. As of January 1st Chelsea was 6th in the league, dropping two places, with their champions league position slipping away. Thomas Tuchel, an experienced top-class manager was brought in. He had no transfer window, didn’t have his own players, didn’t have a pre-season and he was expected to change their fortunes. He has taken them to 4th and into two cup finals including the biggest prize of all.

Meanwhile Mikel Arteta, having dropped Arsenal to 14th place, when we first played Chelsea, was given more time despite some horrible performances on the way down and a few on the way back. Mikel and his partisans may point to the 32 points gained since January 1st and his hauling the club to 9th in the League but the Gunners are out of Europe and hardly any prospect of a top-6 Premier League finish. Tuchel took Chelsea firmly into the top-4 while Arsenal cannot even qualify for the European losers competition. Seems to in this high-level stakes, there was only one winner and it wasn’t Arsenal.

But Arteta loves being an underdog. I wouldn’t be surprised if he makes a fool of Tuchel and me later today. However if Chelsea puts out a strong side I sincerely doubt it. Seems it could be an interesting game given the historical rivalry.