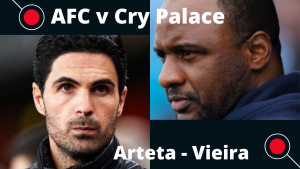 A lot has happened since Arsenal’s last match. Arteta won an award, seemingly half our squad scored goals on international duty, and the women’s team is going great guns. Now if only they can translate that into goals while playing for us that would be great.

Coming to town next is a new look Crystal Palace under a certain Patrick Vieira. The legend makes his first return to the club since he got tackled on the half way line while playing for Juventus, and first ever as manager. Having left the ManCity youth setup to coach their US franchise, and then doing a Nice job in France, Vieira has come back to the PL.

It’s early days but I have been impressed by how Palace approach games. If anything, I think they’ve been slightly unlucky and had a few sloppy moments, or they could be higher up in the table.

Understandably, Vieira was a hot topic even in Arteta’s press conference. Both former club captains and now managers going head to head. Arteta was very gracious about Vieira as a player, although he was more circumspect about how Palace might set up to play.

I was concerned by how he responded to the question about Gabriel Martinelli’s game time, but even more so about how he reacted to the question suggesting Arsenal need to be better in attack. It’s worrying if he isn’t worried about it, because really, we have been really poor. The most he could say was that we need to improve our *efficiency* in attack. I can only shake my head at that, but Palace can certainly be got at, and maybe improved efficiency will be enough.

Hopefully the break allowed the players that were at the club to be better drilled because while Palace retain their ability to play on the counter, they are also showing some ability in possession. Zaha is always keen against us (sometimes too much) and his battle with Tomiyasu will be interesting. I’m sure the occasion will be a boost for both teams – it is a London derby after all- and for both managers.

REMINDER
Sick and tired of mainstream and social media misleading Arsenal fans to the detriment of our football club? Fed up with the the click-baiting and agenda-driven narratives?

At Uncensored Arsenal we aim at providing an alternative point-of-view. That is why we decided to establish our own YouTube channel.