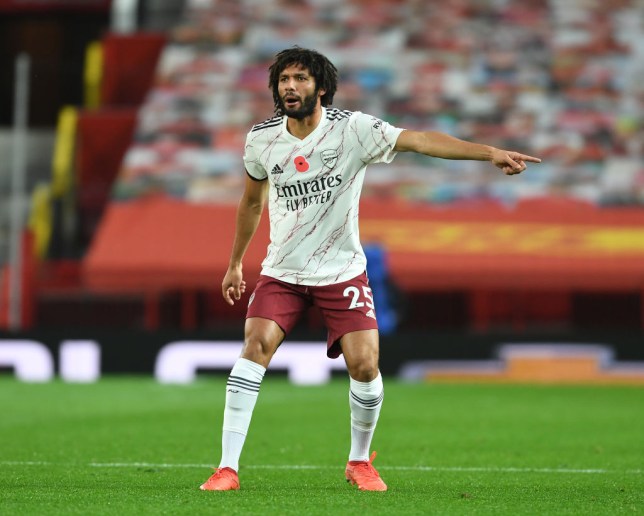 Mohammed Elneny, Man Of The Match

Arsenal beating United at Old Trafford is pleasing. A 14-year jinx was broken and finally many Gooners, who are accustomed to years of grief from United fans, can now do a little bragging and boasting in the next few days.

Obviously Mikel Arteta was effusive after the victory, singing praises for his team’s performance:

I’m really happy that after 14 years without a win, we were able to come and do what we’ve done today. As well I asked the players, ‘Please, let’s be who we are and play with our identity and our style’. I think we did it from the first minute against a really difficult opponent.

It was clearly Arteta’s style on display. He went back to his 3-4-3 set up which he has favored since he took over. With David Luis out injured he shored up the middle of the park with Elneny and Partey who were both tasked to harass and press United’s central players particularly Rashford and Pogba.  They did very well breaking-up United’s attacks. Elneny reveled in his role and is inarguably the Man Of The Match. In the end Arsenal had 20 tackles doubling United’s meager 10.

Instead of long balls from back to front, as it was when at home to Leicester, the emphasis was to build the attacks down the flanks. In the first half there was a lot of Tierney-Saka combinations but as the game wore on Bellerin came into his own. His pinpoint cross in the 43rd minute to Saka deserved a better header instead of climbing over the bar. The Spaniard’s overlapping and combinations with Willian proved a thorn in United’s side and his shot in the 58th minute was straight at De Gea.

Despite Arsenal’s first half dominance the Gooners had zero shots on target in the first half although Saka and Willian had chances which went wide when it was easier to work the keeper. In fact the 1st half was a monument to attacking futility by both teams. Yet Rob Holding seems to think we could have won on a canter:

Yeah we hit the crossbar in the first half and B’s had that header he could’ve put in. On another day we maybe win that 3-0 or 4-0. Just happy to get the win and the clean sheet.

Someone needs to show him the game stats. Arsenal had 7 shots in total versus 8 for United. In comparison when Mourinho’s Tottenham traveled to United they peppered them with 22 shots versus 5 for United. The Spuds left with a 6-1 victory. Or take that attacking “juggernaut” in the form of Crystal Palace. They poured in 14 shots versus United’s 7 and were 3-1 winners. Three games later they played Brighton at home they could muster only ONE shot all game, which was on target but lost 1-2 to a far more attacking team.

The second half resumed with United more energetic and enterprising after ditching their midfield diamond. Both teams traded two shots on target but the moment of truth arrived in the 67th minute. Pogba, who until then had a poor game as United’s primary attacking midfielder (he failed to successfully make one single key pass into the heart of the Arsenal defense) blundered mightily when he decided to tackle Bellerin in the penalty area instead of showing him the byline. Auba broke his 5-game duck, sending De Gea to his right with a hard blazing shot to the opposite side.

Arteta is happy, so are most Arsenal fans. I wonder how many have taken the time out to contemplate the underlying stats which indicate United are terrible at football despite spending mega millions on new player every window; Van Der Beek from Ajax being the newest, shiniest toy. Seven shots all game, 2 on target. In comparison Brighton, at home, in their second game of the season, fired fired 18 shots at United. They won 3-2 by the way.

Such offensive impotence by Arsenal is Emery-esque. But according to Arteta that is our “identity and style.”

Who cares it was only seven shots, so long as we beat United and break the jinx. Right?