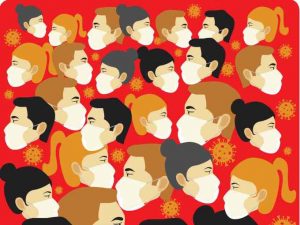 According to one popular English newspaper:

…. Sky Sports are taking a mammoth hit daily at present, as they struggle predominately to bring in advertising during the enforced hiatus of the season. At the earliest, the resumption of the league will begin on April 30.

Two weeks ago when I last did a blog, shortly before Europe became the epicenter of the corona virus pandemic, it was my considered opinion that the 2019-20 Premier League season was over. But clearly there is huge financial pressure on the League to resume the competition.

At the time I castigated the Premier League Limited for their arrogance and neglect by ignoring the very observable data as well as the opinion of the experts that the epidemic was taking root in the UK just as it was doing in Europe. Instead they were publicly insisting there could be an early resumption of the league. Since then, like many other countries, the epidemic has simply exploded in the United Kingdom.

Regretfully my prediction has come true:

…I expect a drastic spread of the disease and substantially more deaths. Under this scenario I cannot see a resumption of the League. It is a write off.

Can the big-wigs get a resumption of the league by April 30th?

Peak and Post-Peak stage of the pandemic

For football to resume, the pandemic must have peaked in the UK and the country successfully overcome the post-peak stage. According to the WHO:

During the post-peak period, pandemic disease levels in most countries with adequate surveillance will have dropped below peak observed levels. The post-peak period signifies that pandemic activity appears to be decreasing; however, it is uncertain if additional waves will occur and countries will need to be prepared for a second wave.

Previous pandemics have been characterized by waves of activity spread over months. Once the level of disease activity drops, a critical communications task will be to balance this information with the possibility of another wave. Pandemic waves can be separated by months and an immediate “at-ease” signal may be premature.

Not even the official authorities in the UK government have dared suggest that the pandemic has peaked in Blighty. Should the initial wave of activity drops off in the near future, who in their right mind would restart football until they are certain the secondary wave has passed?

To the contrary, rather than an imminent peak, the UK has only this past week begun to seriously tackle the spread of the disease, after a prolonged period of indecisiveness. This included an initial dalliance by the Boris Johnson government with the idea of letting the disease spread so the population could develop “herd immunity.”

It was only on 23rd March that Prime Minister Boris Johnson announced that measures to mitigate the virus were to be tightened further in order to protect the NHS, with wide-ranging restrictions made on freedom of movement, enforceable in law for a planned “lockdown” period intended to last for at least three weeks.

Assuming the lockdown lasts until 13th April or thereabouts, for football to resume on 30th April, the premier league is hoping the pandemic will be defeated 17 days later. Frankly this is a pipe-dream.

Let us take the Chinese province of Hubei as our reference. The city of Wuhan was put under “quarantine” on 23rd January. It was such a draconian step that the WHO described it as “unprecedented in public health history”.  Eight or nine weeks later, the Chinese were finally able to say the pandemic was sufficiently defeated to begin loosening restrictions:

Even so people travelling within and outside the province must show proof they are virus-negative.

Who can reasonably predict that the UK will exceed the Chinese and overcome the corona pandemic in less than eight weeks? Not me.

Even May 11th is being super optimistic

Being super optimistic, if the UK government are as resolute and able to mobilize the medical resources at a comparable level as the Chinese, then the earliest one can see a return to football is May 11th or thereabouts.

Given the publicly available knowledge about the breakdown of the NHS, including the lack of hospital beds, medical personnel, equipment and supplies to fight the epidemic, I will stick to my initial prediction that the 2019-20 season is a write off. Convince me otherwise.

Meanwhile I am off to get my groceries desperately keeping my social distance. Thank heavens my community is yet to declare a lockdown.